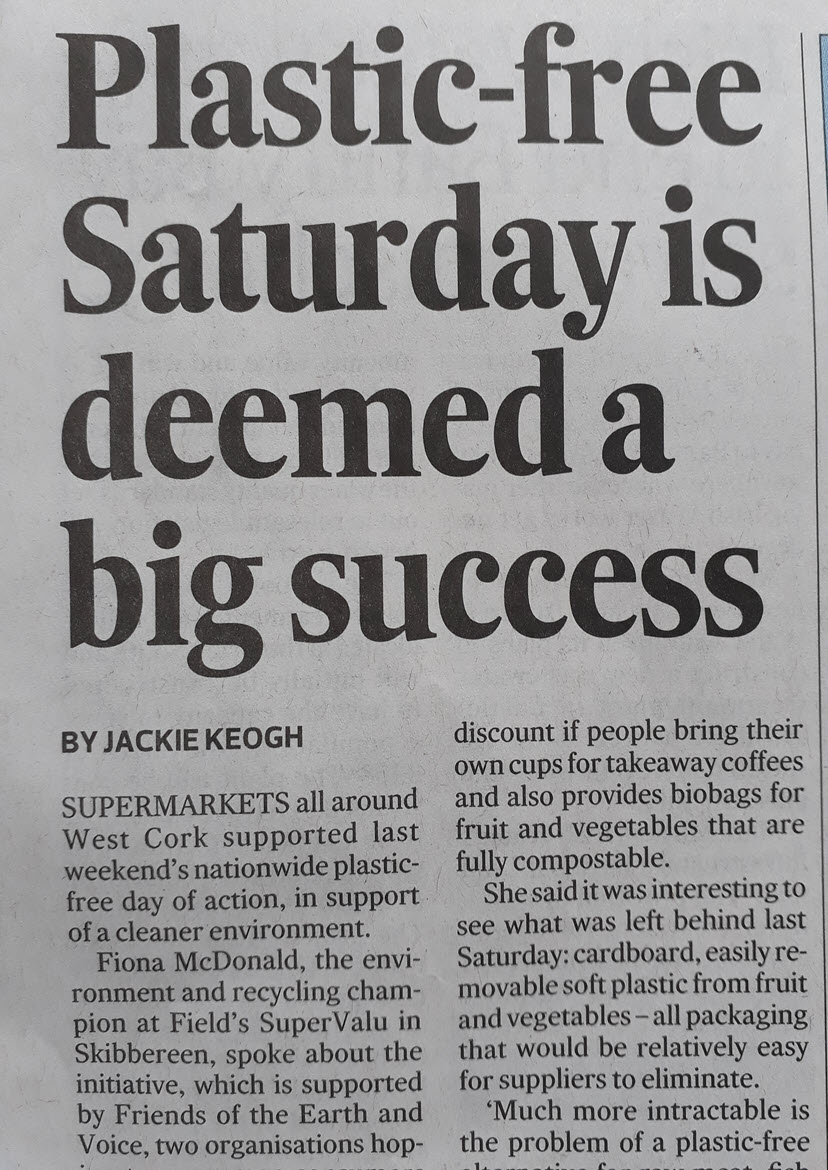 Thousands of shoppers across the country left their unwanted plastic packaging behind them at their local supermarket on Saturday after removing it from their purchased items, in a “shop and drop” day of action reported the Irish Times.  More than 400 volunteers registered for the campaign day with Friends of the Earth (FoE) Ireland, which organised the event with Voice.

The event was supported by many outlets of major supermarkets, who provided extra bins at checkouts for the occasion. Some stores have confirmed they will retain the bins on a permanent basis.  In Skibbereen members of the Zero Waste Group met with the managers of Fields Supervalu and Drinagh Eurospar to discuss how shops and consumers can work together to reduce the single use packaging that is a threat to the planet we live on.

Meaghan Carmody of FoE said the groups’ “Sick of Plastic” campaign was “a simple way for shoppers to let supermarkets know that we want them to use less plastic packaging”.  She added: “The supermarkets knew we were coming and most put out bins for people to put the unwanted packaging in. Now we need them to make lasting changes that give customers an easy way to choose less plastic in future.” 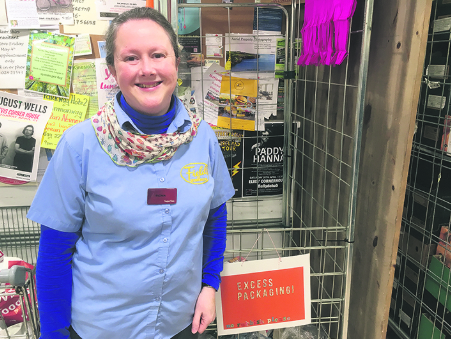 Reported in the Southern Star, Fiona McDonald, the environment and recycling champion at Field’s SuperValu in  Skibbereen, spoke about the initiative, which is supported by Friends of the Earth and Voice, two organisations hoping to encourage consumers to leave behind excess packaging – especially plastic.  ‘It was a demonstration that we are happy to support,’ Fiona told The Southern Star. ‘People can leave anything behind that they don’t want to take with them, and we will dispose of it.’ She also said that if the initiative proved to be a success, the supermarket would consider keeping it on as a permanent feature.   ‘We are  trying to improve our carbon footprint,’ she said of Field’s. ‘We are trying to do things better and to find alternatives to plastic where we can, or at least recyclable packaging.’

The supermarket offers a discount if people bring their own cups for takeaway coffees and also provides biobags for fruit and vegetables that are fully compostable.

The Zero Waste Skibbereen group also reported a very successful event at Eurospar in Skibbereen. The 85-strong group is a subsidiary group of the recently established Sustainable Skibbereen Alliance which will to be formally launched in May.  At 11.30am on the day, representatives met with Gordon Benn, manager of Eurospar on Market St, where special bins for discarding plastic had been positioned at tills for customers’ convenience.  Mr Benn welcomed the action saying that while the Eurospar chain of supermarkets were committed to reducing waste as much as possible, any lasting change would be customer-driven. A total of 160 signatures were gathered from customers in just under two hours, for a petition urging supermarkets to cut down on unwanted and unnecessary plastic packaging.