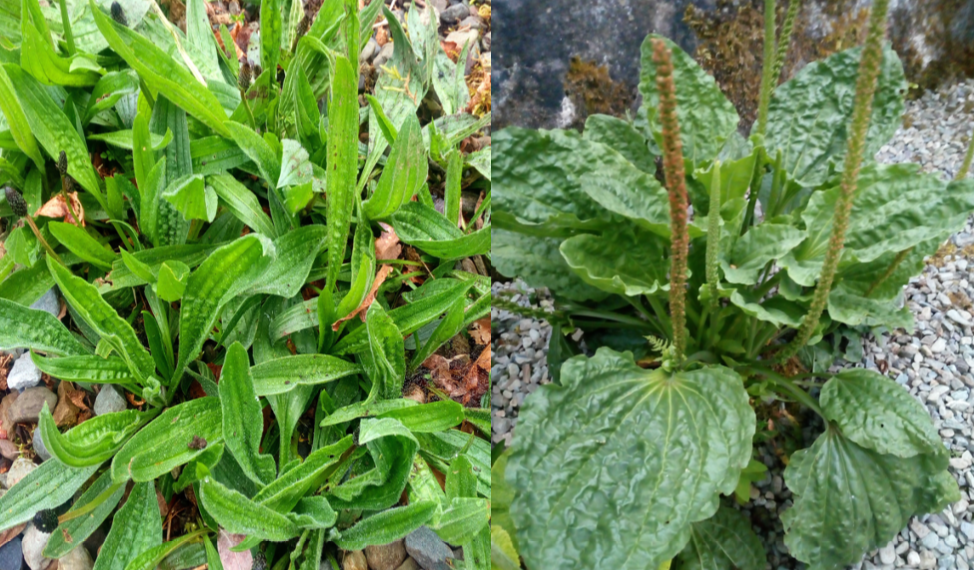 We probably walk by these 2 plants daily and possibly never give them a moment’s glance.
But in fact they possess amazing medicinal actions and uses and are a must in the herbalist’s dispensary. Plantago lanceolata- Lesser Plantain/Ribwort is also known as Snake weed as it was historically used as an antidote to snakebite. At the end of its growing season the leaves take on a pattern resembling that of snakeskin.

Plantago major- Greater plantain was referred to as ‘white man’s foot’ by indigenous Indians in the Americas as wherever the white man walked the plant sprung up! Both plants have a wide distribution and are found in Ireland and in many parts of Continental Europe, in Asia and the Americas. They grow well in damp soil, and the leaves are mainly used for medicine, also the seeds to a lesser extent. They belong to the family Plantaginaceae.

Looking at the constituents explains their excellent application as a soothing/emollient and as a healing agent to damaged skin via injury or inflammation as seen in skin conditions. Aucubin inherent in the plants is anti-inflammatory. Lesser and greater plantain exhibit antibacterial action and are used in infections generally. The mucilage content impart a soothing action (emollient action) on dry, sore irritated skin and heals and restores damaged skin tissue. The soothing action is also used topically to alleviate insect bites, stings etc.

These actions are strengthened by the presence of Allantoin, found also in Comfrey, which restore tissue damage. Mucilages internally, heal and protect the gut and the urinary tract from irritation and coupled with the plants’ cooling diuretic action help to resolve urinary tract infection effectively. The tannins have an astringent action augmenting healing and protecting damaged surfaces.

Both plantains contain zinc and silica which speeds up tissue repair externally and internally. The silica and mucilage content give effective expectorant action, loosening stubborn mucous and making it easier to expectorate thus clearing phlegm and cough. (As an aside, another native plant, Horsetail, has a larger percentage of silica in its leaves and stems, strengthening and toning weak, exhausted tissue.

Horsetail was used historically to clean pewter because of its abrasive silica content!) A common balm or cream can be made from the following 3 herbs and applied to lesions such as eczema, dermatitis, psoraisis, stings cuts and wounds.

These are harvested and macerated in vegetable oil in a bain-marie for several hours to extract their medicinal qualities. The oil is strained and a salve made by melting beeswax into the oil which is poured into jars and left to set. The leaves of both Plantains are nutritive and edible but the fibrous veins of Greater Plantain need to be removed first before cooking, though young Ribwort leaves are nice, (although slightly bitter) eaten fresh in salads or in a stir-fry.
They contain Iron, Calcium,Vitamins C, K and A.