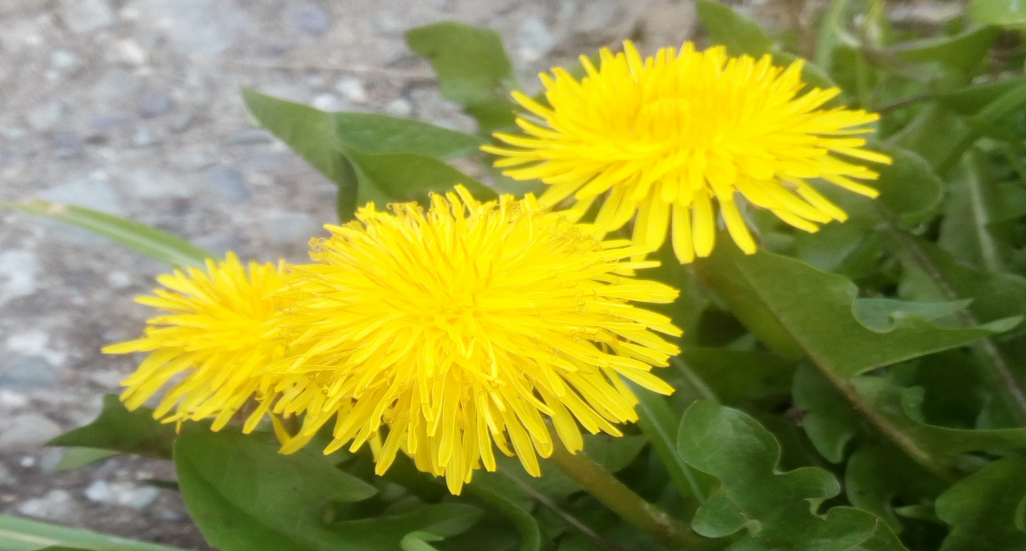 Dandelion- one of the most useful herbs!

Dandelion must be one of the most useful herbs growing abundantly in our native habitat. The name comes from the french, dent de lion – literally meaning teeth of the lion, which the leaves resemble!  It flowers in the spring and its bright yellow flowers are a welcome sight after the drab winter months.  The flowers are also a welcome feed for bees after the long winter,  especially a cold one.  Dandelion grows in damp areas and is commonly seen on roadside ditches. It is a member of the daisy family and has a widespread global distribution.

The leaves and roots are used and both are harvested at different times of the year. The leaves are harvested in the spring and contain vitamins and trace elements so can be used in salads as a nutritive. They ‘clean’ the blood, and people in our not too distant past used Dandelion leaf as a primary remedy, often combined with cleavers and nettles, to ‘purify’ the body, especially after the sluggish winter months.  A tea can be made of these three herbs and used regularly for a week or two to enliven the body and bring it into the spring energy.

Another important action of the leaf is its diuretic action, so much so, one of its common names is “piss a bed”, illustrating this action graphically. Much potassium is lost in diuresis but the abundance of potassium found in dandelion leaf augments this important element. The diuretic action is applicable to cystitis as it promotes urine flow and it is helpful in hypertension when oedema (swelling) is present. Dandelion flowers are a vibrant yellow and can be harvested and made into an infused oil which is later heated gently and beeswax added to makea salve. The salve can be used to hydrate the skin and alleviate dryness.  The stem, when cut, oozes a white latex type sap which was used historically as a topical application for warts.  lt is in the autumn months that the roots of Dandelion are harvested. The root is an appreciable bitter tonic used primarily to aid digestive, liver and gall-bladder function. The entire action of the digestive organs are improved as well as that of the gut biome.

The bitter taste of dandelion will induce the flow of digestive enzymes enhancing digestion and absorption of nutrients.  It is interesting to note that most aperitifs are bitter in nature illustrating the knowledge behind taking them before a meal. Bitters increase the flow of bile from the liver and is stored in the gall bladder, helping to keep cholesterol levels steady and to reduce the formation of gall-stones. Bile is released to aid fats digestion when fats are consumed.

The liver becomes overburdened with pollutants in food, water and by medication use, which dandelion root can ease by eliminating toxins. Dandelion’s ability to detoxify the liver eases general malaise and tiredness and relieves skin conditions manifesting as red lesions on the skin, such as in eczema and psoriasis. It also relieves joint pain and stiffness where a build up of toxins exist,and made more effective when combined with other herbs such as Nettle, Willow bark and Meadowsweet, for example.

The above illustrates some of the uses of Dandelion which is an important herb in the herbalist’s Materia Medica.